The scientists studied the impact of projected changes in air temperature and precipitation on the fertility of forest soils in 21 sites located in Québec, Canada. 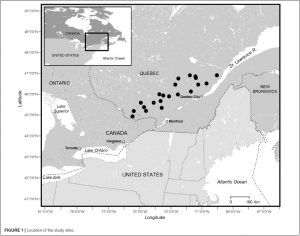 Climatic models project that air temperature will increase by up to 4–7°C in Québec by the end of the century relative to the 1971–2000 period. This will alter the temperature and the humidity of the soils and hence the rate of many soil processes, such as chemical weathering. Chemical weathering of soil minerals releases ions in the soil solution such as base cations, which are essential nutrients for trees and control the acidity of rivers and lakes. Using geophysical and geochemical models, the researchers found that soil temperature will increase by on average 2.03–2.05°C during the 2041–2070 period and by 2.87–3.42°C during the 2071–2100 period relative to the 1971–2000 period. Meanwhile, soil humidity will only slightly decrease (<5%). The model simulations show that the projected increase in soil temperature will increase base cations weathering rate by up to 20–22% during the 2071–2100 period. This will result not only in an increase in base cation concentrations in the soil solution, but also in a reduction of soil, river and lake acidity at most studied sites. This study suggests that the future rise in temperature has the potential to ameliorate the acid-base status and the fertility of soils in eastern Canada.